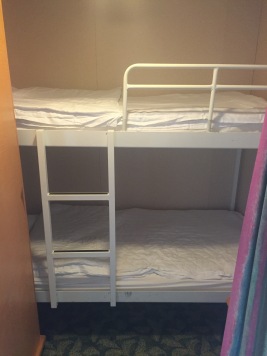 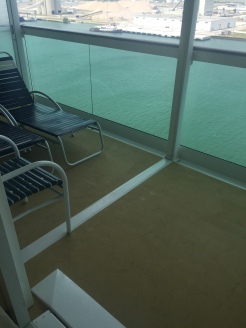 Labadee was our first stop and our second time visiting Royal Caribbean’s private island. Months prior to our cruise I noticed that there was an accessible cabana that came up on my excursions list in my RC account. I emailed the special needs excursion desk to get more information. So basically there is a ramp to the cabana and that was pretty much it. From where the paved walkway ends and the ramp begins there is about 150 feet of sand. Not just that but once inside the cabana there are 2 loungers and then a step up to a couch, which is not accessible. Knowing that Labadee has sand wheelchairs that can be used to take you into the cabana we decided to book it and give it a try. These cabanas are quite expensive but they do offer comfort for the whole day, coolers of bottled water, water floaties and your own personal cabana boy for the entire duration of the day. Now the beach chairs are not left with you so you have to still have your personal wheelchair in case you need to use the bathroom or just move around at all. We had rented a folding wheelchair because I wasn’t sure the power chair would work on the sand. Once there I did find the sand quite packed so a power chair may have driven over it but I can’t say for sure. The beach wheelchair did come back once our cabana attendant called for it. Locals are the ones pushing the chair to and from the ship so gratuities are expected of course. Overall this was my favourite day because we were all able to enjoy the day together. Shawn was able to sit in a nice shaded cabana but had a great view of his kids playing on the beach and in the water. I also should mention that there are trams that can take you to and from the cabana but they are not wheelchair accessible. We used it to take us to the restaurant to grab some food and bring it back for Shawn though. 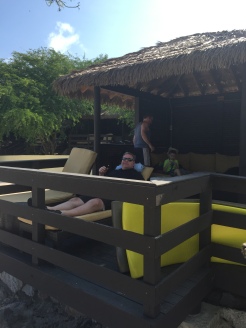 Originally we had booked an accessible excursion with a private company in Jamaica that has accessible shuttle buses. We decided not to do an excursion when we looked at how much travel time was required to get anywhere from Falmouth. It is not near anything and anything that was a close driving distance wasn’t of any real interest to us. The port area was nice enough to stroll around the shops and have a bite to eat at Margarittaville. Margarittaville gets very busy so you may have to wait a bit for a table that is accessible or near the entrance because it is quite crowded and the tables are close together, making it difficult for a wheelchair to maneuver. There is a pool but once again crazy busy and crowded. Expect ridiculously expensive meals and drinks and pretty poor service. It was a fun atmosphere regardless.

This stop was a tendered port so Shawn decided not to attempt to get off. The boats that we were on did have ramps but they were very steep and narrow. It could be possible for maybe a manual chair but I was too nervous to try it with a power chair. I ended up doing an excursion with the kids and Shawn stayed back and enjoyed a quiet ship. Since most people were off the ship it was like having the run of the place. No crowds and no waiting for elevators.

Our final stop was in Cozumel. We ended up going through the same private company we went through last year. Since I had used them before I knew to book the raised roof accessible van (see Vision of the Seas review). It was a bit chaotic when we got to the taxi stand and we were just told to tell the dispatcher that we had pre-booked a van. They had no idea what we were talking about it and it probably was close to 30 minutes of waiting and talking to several people at the taxi stand before someone knew which van to call for us. It was all so unorganized and while we were waiting we saw several accessible taxis that were just there and pick up other wheelchair users. So I think that in the future we would not pre-book a private shuttle because it is expensive so we would just take our chances that we could just catch a taxi at the taxi stand. We booked the private shuttle for 5 hours but we decided to spend the entire time at Paradise Beach. It was very accessible and lots for the kids to do and a fun environment. We got there early enough that we were able to get a nice spot in the shade for Shawn to watch the kids play in the pool. 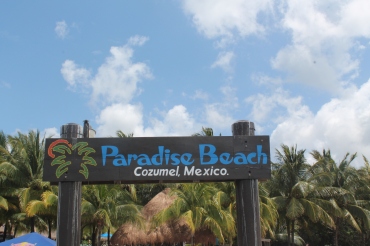 Overall we had a great time and even though we have considered trying a different type of vacation (i.e. all inclusive), I think we will probably just continue taking cruises as they are hassle free and we always have such a great time!